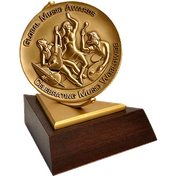 The work "Canto por el Agua" is conceived as a cantata, although not in the formal sense of the sacred or secular cantatas, nor of the popular cantatas of the 20th century. It is rather a musical piece written for six solo voices (2 from the academic world and 4 from the popular world), piano, bandoneon, percussion and string octet, divided into four movements or arias, whose common theme is water.

The first part, entitled "Sovereign Water", is -as a plot- a conceptual approach, and -as a musical aesthetics- basically a zamba air.

The second part, "Guanahani and Guami´keni", is a dialectical game between mother earth (Guanahani) and the conqueror (Guami´keni). It is important to note that the soprano texts are written in Taino, an indigenous language of the Arawak family that was spoken in the Antilles around the time of the "Spanish Conquest" and is now extinct. Although there is no definite musical form, one can glimpse both romanticism and the dramatic and descriptive aesthetics of American golden cinema.

The third part, titled "El Diablo de la Semilla" (The Devil of the Seed), aims to be the voice of the peasant, thematizing the dispossession of the multinationals Barrick Gold and Monsanto. In its musical form, it could be defined as a zamba in simple compás, with harmonies that encompass both romanticism and Argentine fusion music.

Finally, "Los sobrevivientes," which is fundamentally a tango, attempts a futuristic themed setting, in which a group of people resist the onslaughts of a present without water. The last verses of this aria are a paraphrase of the text "De agua somos" by Eduardo Galeano.